Having moved to Kelowna BC after spending the last few years on the West Coast, it’s been fun learning the Art and Music scene here in the Okanogan Valley. Sunday’s in our house are usually focused on reconnecting after hustle filled work weeks, new music in the form of vintage vinyl and adventures.

A few weeks ago, while it wasn’t ungodly cold we biked downtown on one of the epic City of Kelowna bike paths in search of a new record to add to our collection. We had heard of the store Milkcrate Records and wanted to check it out. While there, not only did we find a sweet vintage copy of Hall & Oats Greatest Hits (Self disclosure – I freaking love Darryl Hall and John Oats, and when ever I need to mentally prepare for a meeting or a tough pitch, an interview even, my go to song is “You Make My Dreams’ – because I make my dreams every damn day!) buuuuuut I digress, as also learned of a live show series that is going on. That day while in the store, we were invited to an intimate show with a couple of up and coming Vancouver Bands. In store. (think Empire Records, but less teen angst and more locally brewed craft beer and cider!) There are couches, a raised stage and really good sound. I highly recommend the experience. 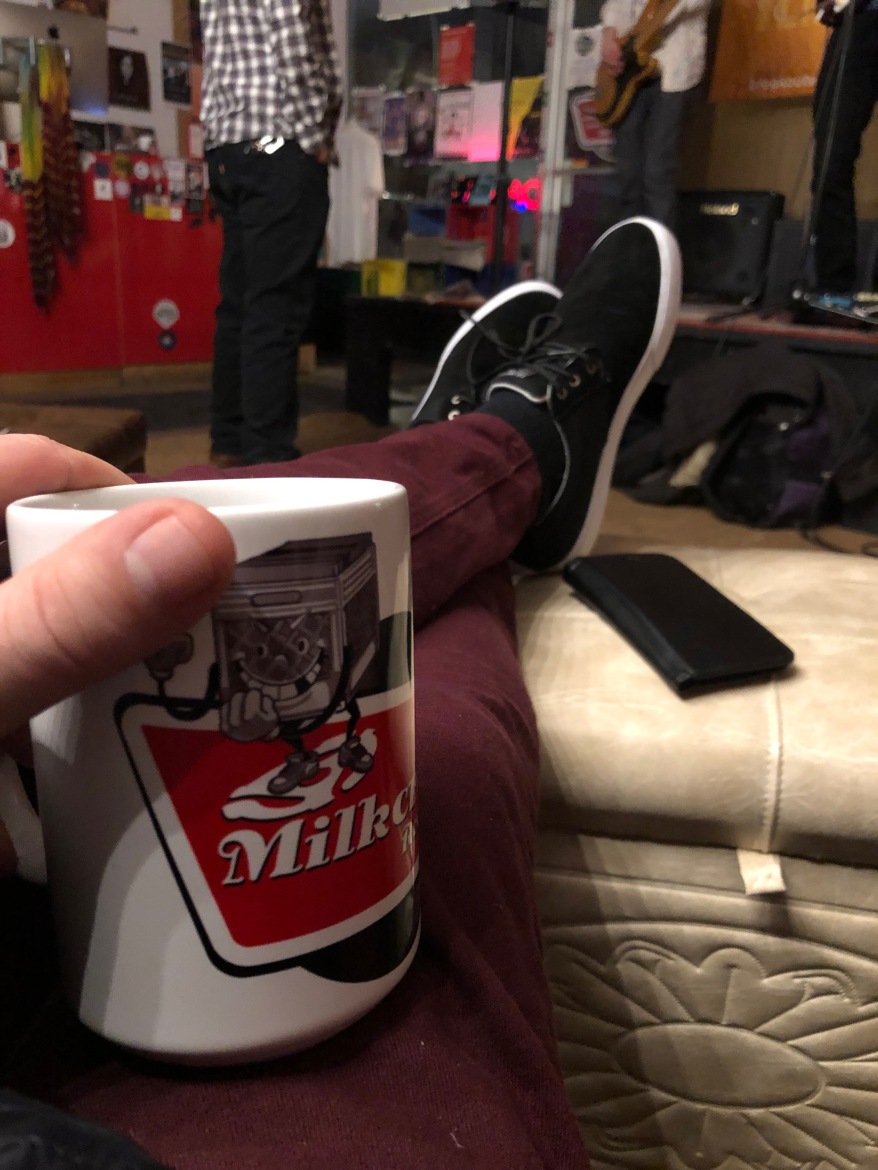 This brings me to our Music Monday interview with the Vancouver locals, Mind Offline. I was so impressed with the fun vibe of the band, but more – although a young band, they have only been together for a year, they have a great show. Connection to the audience, is so key in my opinion. I love the raw talk, the story telling and the authentic sharing on creative process. These musician did this really well. Talent is a given but what separates good from great is passion and connection.

I’ve included a song at the bottom of the post, have a listen. We can’t wait to see what they create next and without further adieu; Mind Offline. 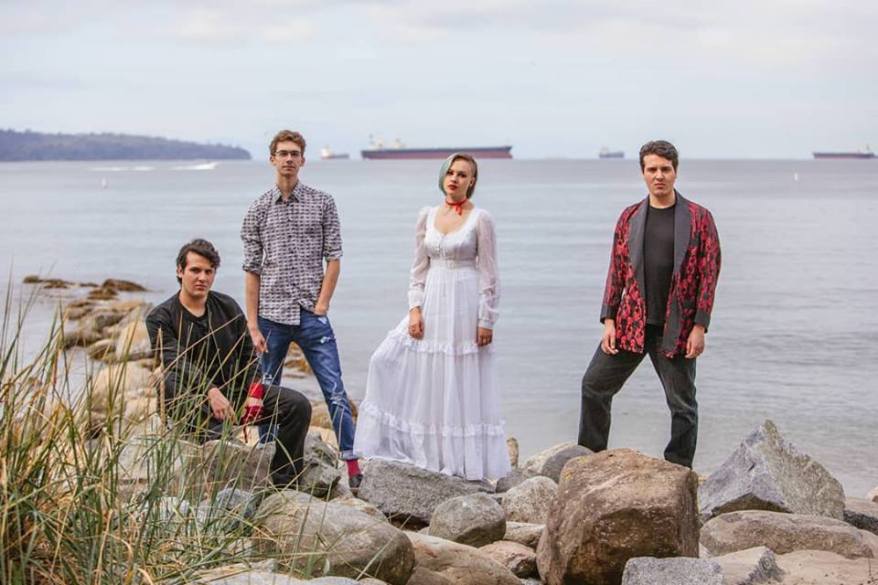 LBH:  When did you begin playing as a band? What inspired you to start making music? Can you briefly describe your process? What do you do outside of music to rejuvenate your creativity?

Mind Offline: We began playing together as a band in September of 2017. Gabriel and Derya had been in musical projects together before and knew there was musical chemistry between them that couldn’t be ignored. Gabriel had met the twins, Joaquin and Julian, in music school at Douglas College, and thought they would be a perfect fit to form a band together with Derya. We started jamming together and created almost two songs in our first band practice; the spark was instantaneous. We all came from a background of loving music, and growing up with it in our blood, so it was quite a natural transition for us to become musicians. Derya has never had any formal musical training outside of piano lessons when she was young, but her spontaneity compliments the boys’ more technical background, creating something musically unique. To rejuvenate our creativity outside of music we spend time in nature and with friends and family. Often we find listening to other people’s music inspires us as well.

LBH: Who writes your songs? Have you noted a theme to your music? Are you conscience of sharing a message? Who are you hoping to impact?

Mind Offline: The songwriting process is very collaborative for us. Everyone brings something unique to the band and we always strive to have a little bit of everyone’s special something in our songs. Derya writes most of the lyrics but regardless of who writes what part of the song we always envision the song and craft it together. The sound of our songs is constantly evolving as we as musicians do; thus, it is hard to pinpoint a theme to our music. We hope only to bring smiles to peoples faces when they hear us: for them to be able to resonate with the lyrics; feel the emotions each song is drenched in; and to have no choice but to move their bodies in response. We think our sound is diverse enough to appeal to many age groups and fit into many genres, so we hope to be able to impact many people in a positive way.
LBH: What moves you, as an influencer I am curious what drives YOU to do what you do everyday? Where does the spark come from?
Mind Offline: We make music because it feels good to make music. Having people like what we do is an amazing feeling, but it starts with us falling in love with it. Each song we write had its moment, when we all knew it was something special and obsessed over it. Music is quintessential to humanity and has the power to cure so much of what ails us. There is something indescribably beautiful about making people smile when they listen to something you’ve made. As we mentioned before, music has always been a part of us in one way or another. So “the spark” for us is hoping people will feel that same burst of joy when listening to our music that we feel when we make it.

LBH: What do you absolutely LOVE about yourselves? We are so quick to judge flaws, but I am curious – what do you love about yourself. Like attracts Like. It’s super important in our success process to become aware of our own magic

Mind Offline: As not only humans but also musicians functioning in a society that constantly is judging this, we will admit this is a hard question to answer. Derya loves her ability to adapt to her surroundings and see beyond what people present. Gabe loves the fact that he is 6’4. Joaquin really likes that he is a determined person; he usually won’t stop working on something until he gets what he wants. Julian loves his ability to empathize with people’s personal issues; he is usually able to easily understand what they are going through and talk through things with them.

LBH: Let’s look back a little more. If you could step back in time and have a chat with your younger self: What advice would you give?

Mind Offline: Julian would advise his younger self to never stop pushing his own boundaries; because whether it’s as simple as changing a song on your playlist or as complicated as changing your point of view, pushing forward will define how you grow as a person. Gabe would tell his younger self to worry less, listen to more music, and to play more guitar. Joaquin would tell his younger self to stop worrying about what others think and start focusing on improving himself as a human being. Derya would reassure her younger self that there is so much more happiness to be had in the world that she ever could have imagined. She would advise herself not to be in such a rush to do everything at once, but rather soak in the present moment and take things as they come.

LBH: What is something you really want us to know about you?!

Mind Offline: Gabe wants you to know that he is actually a sentient robot; Joaquin doesn’t like vinegar chips but he will eat all seasoned non-stop; Julian likes hitting the drums really hard; and Derya could probably live off of pickles if she had to.

WHAT’S NEXT for Mind Offline?

Next show? Location?Mind Offline: The future holds so much excitement for us. One year ago, on February 3rd, we played our first show, and we are so proud of how far we’ve come. We are looking into recording a music video and are about to record a new single right now, so keep an eye and an ear out for that. We love connecting at shows or on social media! We hope to tour in the summer and play at lots of festivals and with many new bands and artists. We can’t wait to write some new tunes and continue to explore ourselves and share what we find with all of you!

UPNEXT: February 16th we are playing at The Bourbon in Vancouver.

Mind Offline is an alt-rock band based out of Vancouver, BC. Having celebrated their one year “band-iversary” last September, they cannot wait to grow together, evolve, and experiment in the years to come. Their music effortlessly entwines delicate vocals with catchy melodies, lyrics, and unique instrumental riffs. Their technical background and songwriting chemistry sets them apart, giving them the ability to casually flow between genres such as jazz, rock, grunge, pop, and of course indie. Each member of the band brings unique elements to their sound, designing something that anyone can resonate with. Let loose and let your mind go offline as you listen to their passionate, euphonious, and refreshing tunes.