The two MCs, Danimal House and Doc Zoo, bring high energy, raw, and unforgiving lyrics with complex flows and a wide variety of content and themes.

Previously The Funkee Wadd has always been down to bring the flavour with precise cuts and scratches and constantly keeping the party live, this week as creative directions are being nurtured, Illvis Freshly said goodbye to Kyle and welcomed Mt. Doyle.

Mt. Doyle has been a staple in the Victoria Electronic scene for as long as any of us can remember, and we could not be more excited to have this beast hold it down in place of The Funkee Wadd. -Illvis Freshly 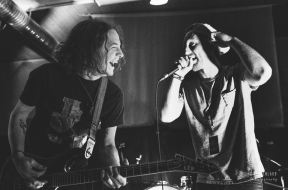 LBH, being from the west coast ourselves, has a special place in our big ol heart for this song. “On The Breaks” was filmed on location in Tofino, British Columbia. Home to some of the best cold water surfing in the WORLD as well as in Cathedral Grove where the life energy is on pointe.

The past year has been paramount for the boys, having had the chance to share the stage with many incredible acts such as Souls Of Mischief, Neon Steve, Obie Trice, Skiitour, Stickybuds, Ghettosocks, Emotionz, Scott Jackson Fresh Killz, and many more.

The summer of 2015 has been a pivotal year for the boys, heading all across BC performing at amazing festivals such as Atmosphere Gathering, Shambhala Music Festival and local festivals, Rifflandia and Tall Tree Music Festival, where they were voted in by the community of Victoria and beyond to perform. Illvis Freshly is bringing the ruckus to the west coast, straight goods.

On this awesome night, All profits will be donated to The Turntemple to aid with its efforts in offering pop-up after school programs with an urban edge to youth at risk.

With 3 awesome artists, 1 audacious band, beautifull dancers & good vibes, this show will SELL OUT!! Don’t miss out on this great opportunity to give back to the community. Invite your friends & bring the love!

See Monday, with the right tunes.. you aren’t so bad.